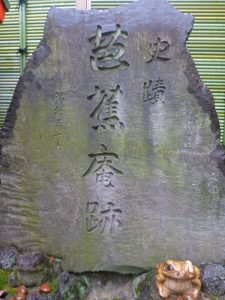 While in his forties, Basho departed on numerous trips from his home in Fukagawa, Edo.

On May 16, 1689*, he sold the Edo Basho-an hut where he was currently living, and set off on a journey to the Tohoku and Hokuriku regions. After staying for a time at his disciple Sugiyama Sampu’s villa, he boarded a boat that took him from Fukagawa up the Sumida River to the post town of Senju on the old Oshu Highway. The disciples that had accompanied him to Senju then bid him farewell, and he departed for Michinoku (the old name given to the Tohoku region) accompanied by his travelling companion Kawai Sora.

Basho would later publish his Oku no Hosomichi (“Narrow Road to the Deep North”) travel narrative which describes this journey, and the first haiku to appear in this work was the following:

kusa no to mo / sumikawaru yo zo / hina no ie

Basho imagines his old hut with a new owner, one far unlike the reclusive hermit that he himself was, and visualizes a cheerful household with a daughter displaying hina dolls for the Girl’s Day Festival.

There is an existing painting of Basho in his travelling garb painted by his disciple Morikawa Kyoriku, and of the many portraits of Basho that exist, the image in this painting is believed to most closely resemble the real Basho. Not only was Kyoriku, a samurai of the Hikone Domain, a highly accomplished painter, but as a person who became a disciple of Basho’s in his later years, he was a painter who was directly acquainted with the haiku master. This painting can be found in the Yamadera Basho Memorial Museum collection.

Basho’s residence in Fukagawa was known as the Basho-an hut, but Basho in fact lived in three huts that were given this name. The Basho Inari Shrine now stands on the former site of one Basho-an residence, and the Koto city Basho Memorial Museum can be found nearby.

*In Basho’s day, the old lunar calendar was used, and his date of his departure would have been expressed as “the 27th day of the 3rd lunar month,” which would be May 16 according to the Gregorian calendar that is used today. There are slight discrepancies between old lunar dates and modern dates, but all dates given here correspond to the Gregorian calendar unless otherwise noted.