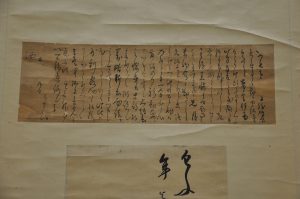 Letter from Basho to Shado

This hanging scroll features a painting of Basho and a haiku poem, above which is pasted a letter written in Basho’s own hand.

The portrait of Basho was painted by Kangai, a village headman in the Noto Province (present-day Noto Peninsula, Ishikawa Prefecture) during the late Edo period. This painting is accompanied by a poem composed by Basho:

The letter above this portrait was written by Basho to his disciple Shado, a physician in the town of Zeze in the Omi Province (present-day Otsu city, Shiga prefecture). When Shado decided to move to Ozaka (present-day Osaka city) to become a haiku poet and teacher, this led to a falling out with Shido, another of Basho’s disciples who also lived in Ozaka.

In his letter, Basho reproaches Shado for his course of action. This letter, which contains phrases such as “You think too much of yourself,” and “If you will not do as I say, I will break off our relationship,” is notable for the harshness of Basho’s tone, something seldom seen in his other letters.