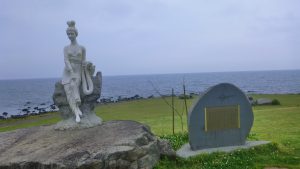 During his stay in Sakata, Basho travelled northward up the coast of the Sea of Japan to visit Kisakata. At the time, Kisakata was an ocean bay dotted with many islands, and the beauty of this scene was said to rival that of Matsushima. However, an earthquake in the early 19th century caused the sea bed to rise, leaving the former islands surrounded by land.

Basho boarded a boat that took him to Noin Island, where the Heian-period poet Noin was said to have led a secluded life for three years, and he also viewed the old cherry tree that the celebrated poet Saigyo wrote of in a poem.

When comparing Kisakata and Matsushima in his travel narrative, Basho says that Matsushima has a “laughing beauty,” while Kisakata’s beauty is of a mournful kind. He also includes the following haiku:

In this haiku, Basho likens the wet flowers of the nebu (or “nemunoki,” the Persian silk tree) which he saw in Kisakata to the sleeping image of Seishi (Xi Shi, a legendary beauty of ancient China). The word “nebu” has a double meaning, for it can be taken to refer to the nebu tree, while the sound also resembles “nemuru,” which means “to sleep.”

Xi Shi’s beauty was said to have been so great that she was beautiful even when she frowned, leading other ladies to imitate her frown in an attempt to achieve her beauty. The Japanese idiom hisomi ni narau (literally, “imitate another’s furrowed brows”), meaning to imitate or follow someone else’s example, comes from this legend.