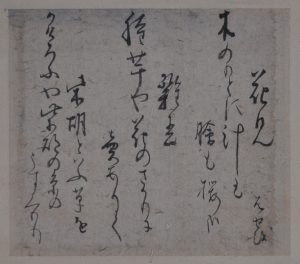 Ki no moto ni (Under the Trees), 3 haiku poems

under the trees / soup, fish salad, and everywhere / cherry blossoms*

In 1690, the year following his Oku no Hosomichi journey, Basho wrote this haiku while composing renku linked verse at a hanami (cherry blossom viewing) held at the home of his old friend Ogawa Jirobei, a samurai of the Todo clan who also went by the haiku name “Fubaku,” in his hometown of Ueno, Iga Province. This poem conveys Basho’s envisioning of a hanami in which cherry blossoms would flutter down to completely blanket the people seated under the trees, their soup and namasu (thinly sliced vegetables and raw fish in a vinegar sauce), and everything around them in a sea of petals. “Shiru mo namasu mo” not only refers to actual Japanese dishes, but is also used as an idiom to mean “everything.”

seed potatoes / amidst the cherry blossoms / the vendor makes his rounds

Basho composed this haiku during the same visit to his hometown in Iga Province. The “seed potatoes” he writes of are seed potatoes of the satoimo, the Japanese taro root. Taro roots are usually associated with autumn, for they are one of the typical offerings for the mid-autumn harvest moon viewing (the 15th night of the 8th lunar month was even known as the imo meigetsu, or “taro potato full moon”), but this poem makes an unusual association between taro roots and spring by presenting them in the context of a seed potato vendor peddling his products during the height of the cherry blossom season.

kagero ya / saiko no ito no / usugumori

In Japan, the name given to the saiko (bupleurum root) plant is okinagusa. The roots of this plant are dried for use in traditional Chinese medicine preparations used to treat symptoms including fever, pain and poisoning. Saiko no ito, or the “saiko’s threads,” refers to the thread-like filaments that sprout from the fruiting heads of the plant. This poem conjures the image of saiko threads swaying in the undulating heat haze of a lightly cloudy spring day, and it is believed to have been written in the same time period as the previous two haiku.