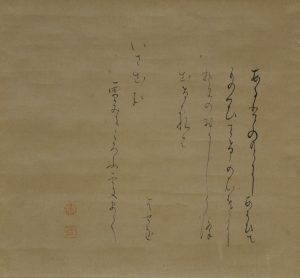 This work was written upon traditional kaishi paper, and the calligraphy is from the hand of Basho himself.

let’s go out / and enjoy the snow, until / we tumble over

In early December 1687, Basho was travelling west from Edo when he stopped at a friend’s home in Nagoya for a meal. He was feeling the pleasant effects of the sake he was drinking when it began to snow outside. After a fair amount of snow had accumulated, he composed this poem which suggested going outdoors for a yukimi (“snow viewing”), whilst enjoying the sliding and tumbling that came with this.