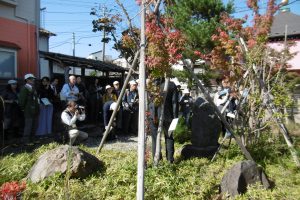 After leaving the Dewa Sanzan area, Basho and Sora travelled to the castle town of Tsuruoka in the Shonai Domain, where they stayed at the home of Nagayama Shigeyuki, a feudal retainer with a taste for haiku poetry. The fatigue of the Dewa Sanzan journey had taken its toll on Basho, and he was feeling unwell at the time.

While in Tsuruoka, Basho composed the following poem (which does not appear in the Oku no Hosomichi travel narrative):

The first fruits of a harvest were considered to be very special, and in this haiku, Basho expresses his pleasure at being treated to the first eggplants of the summer, which helped him to forget the fatigue of his travels through the Dewa Sanzan mountains. In the haiku, the word idewa has a double meaning, for it can be read as both “yama wo ide” (leave the mountains) and “idewa” (Dewa).

At the time, travellers journeyed between Tsuruoka and Sakata via river boats that proceeded down the Uchikawa River, which flowed through the Tsuruoka castle town and merged with the Akagawa River which then flowed into the great Mogami River. There was an embarkation point very close to the Nagayama home, and Basho boarded a boat there which took him down the Uchikawa River towards Sakata.

Today, there is a small park where the home of Nagayama Shigeyuki once stood. Next to this is an apartment building called the “Banana House.” This is interesting, for basho (from whence Basho’s name comes) refers to a non-fruiting variety of banana tree. A fruiting banana tree, incidentally, is called mibasho in Japanese.