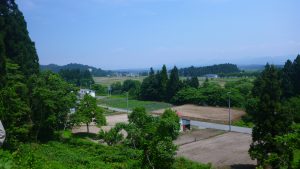 While Basho originally had no plans to visit Yamadera or Risshakuji Temple, he decided to do so on the recommendation of the residents of Obanazawa. He had arrived in Obanazawa on July 3, staying there for 11 days, and he then traveled almost 30 kilometers southward to reach Yamadera, where he spent one night. The next morning, he headed northward once again towards Oishida, a flourishing port town on the Mogami River. He took part in a renku (linked verse) poetry gathering with some local poets, where he composed the following hokku (the first 5-7-5 stanza of a linked verse poem):

gathering seawards / the summer rains, how cool it is! / Mogami River

However, the poem that appears in the Oku no Hosomichi travel narrative is as follows:

gathering seawards / the summer rains, how swift it is! / Mogami River*

In the original poem, Basho uses “suzushi” (cool) to allude to his gratitude towards the people of Obanazawa for keeping him cool during his stay, while “hayashi” (swift) in the revised poem is a reference to the image of the rapid Mogami River familiar to readers of classical poetry.

From Oishida, Basho proceeded to the castle town of Shinjo, ruled by Lord Tozawa, where he stayed at the home of Shibata Furyu, a wealthy merchant with a taste for haiku poetry. After participating in another gathering with local poets, he boarded a boat at Motoaikai port that took him down the Mogami River towards the Sea of Japan.