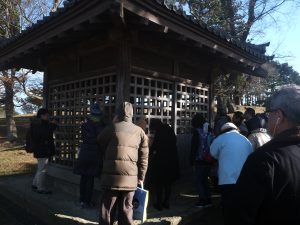 Taga Castle was a large government fortification built by the Yamato court during the Nara period. The castle itself was gone by the time of Basho’s visit, but the Tsubo Monument that still stood on the castle ruins described the origins of the castle. Basho was moved to tears to read the worn inscription that had survived a thousand years to testify to the castle’s ancient past.

Basho then visited a number of famous places that appear in the poems of old: Noda no Tamagawa, Oki no Ishi, and Sue no Matsuyama. Noda no Tamagawa (the Noda Tama River) was one of the “Six Tama Rivers” widely admired for their beauty. “Tama” was used to refer to something that was “as beautiful as a jewel,” and particularly beautiful rivers were given the name “Tama River.”

The Oki no Ishi (Rock in the Offing) refers to a pond with a curiously shaped pile of overlapping rocks which is described in a classical waka poem as follows: “Just as the Oki no Ishi rocks are perpetually wet, so is the sleeve of my kimono, which is kept busy wiping the tears of one who is always lovelorn, and never has time to dry.”

Sue no Matsuyama (Sue no Matsu mountain) is the name given to an elevation which offers a view of the nearby ocean. Sue no Matuyama appears in a famous poem found in the early 10th-century Kokin Waka-shu anthology of waka poems: kimi wo okite / adashi gokoro wo / waga motaba / sue no matsuyama / nami mo koenamu (if I were to love someone who was not you, the sea waves would rise and sweep over Sue no Matsuyama). This elevation has long been known as a place that the waves of the ocean have never reached, and local citizens who took refuge here after the 2011 Tohoku Earthquake were able to escape the tsunami which followed.