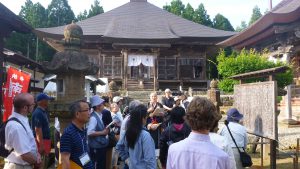 An important center of mountain asceticism for over 1400 years, Dewa Sanzan, or the “Three Sacred Mountains of Dewa,” refers to the sacred mountains of Mount Haguro, Mount Gassan and Mount Yudono. While the Dewa Sanzan area now has Shinto shrines, it was established at a time when Buddhism was assimilated with Shintoism, and there were originally Buddhist temples.

After disembarking from the boat that took him down the Mogami River, Basho paid a visit to Kondo Sakichi (also known by the haiku name “Rogan”), who lived in the town of Toge by Mount Haguro. Sakichi took Basho and Sora up Mount Haguro, where they met the High Priest Egaku, the acting administrator of the mountain temple. Basho and Sora were provided lodging at a branch temple in the Southern Valley, where they were made very comfortable.

At a poetry gathering held by Egaku, Basho showed his appreciation to his host by composing the following haiku:

Although it was summer, Basho describes how the snow which remained in the mountain valleys could be scented on the wind, which he found a very spiritual experience. In the Oku no Hosomichi travel narrative, however, this poem appears as: arigata ya / yuki wo kaorasu / minamidani (so holy a place – / the snow itself is scented / at Southern Valley*).

After this, Basho and Sora climbed Mount Gassan and Mount Yudono with a yamabushi (mountain ascetic) who acted as their guide. After returning to their Mount Haguro lodging, Basho wrote down the haiku he had composed about the three holy mountains.

In the evening, this poem says, after the heat of the afternoon had abated, the faint crescent moon hanging over Mount Haguro brought with it a sense of coolness. In the Oku no Hosomichi travel narrative, this haiku appears as: suzushisa ya / hono mikazuki no / haguro san (how cool it is here – / a crescent moon faintly hovers / over Mount Haguro*)

the peaks of clouds / have crumbled into fragments – / the moonlit mountain!*

In this poem, Basho recalls how the large, dense clouds in the afternoon sky gradually broke up and disappeared, with the moon over Mount Gassan at last becoming visible in the evening.

I cannot speak of / Yudono, but see how wet / my sleeve is with tears*

Although it was forbidden for the pilgrims who climbed Mount Yudono to speak about the mountain to others, Basho writes of how he could not help being moved to tears by his profound experience.

At Egaku’s request, Basho also composed a memorial writing and poem to honor the memory of Tenyu Hoin, a priest of the highest rank and an important leader of the Dewa Sanzan ascetic movement.

Travelling through the Dewa Sanzan mountains was a grueling experience which involved climbing to the almost 2000-meter-high summit of Mount Gassan and traversing a number of dangerous areas, but it was at the same time a valuable experience which deepened Basho’s understanding of nature. Egaku, Rogan and other inhabitants of the area were also very respectful of Basho and his masterful abilities as a haiku poet, and they were warm and welcoming hosts.