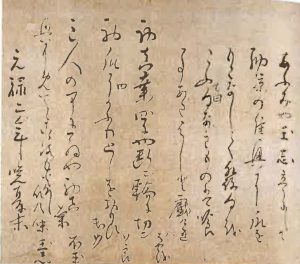 In Basho’s day, Yamagata’s Sakata town (now Sakata city) was a flourishing port town which shipped local commodities such as safflower and rice to Kyoto and other areas. Sakata was home to many powerful merchants including Omi Yasaburobei (also known by his haiku name Gyokushi), who invited Basho to stay at his home. August 9, two days before Basho left Sakata, was an exceedingly hot summer day.

Hoping to provide his guest with some cool refreshment, Gyokushi served Basho a makuwa melon, a type of melon enjoyed in Asia. This melon was one of the first of the season, and with such “first” seasonal products highly prized because of the belief that they contributed to longevity, serving a “first fruit” was considered one of the highest ways to honor a guest.

Gyokushi playfully told Basho and the other guests also present that they must compose a poem about the melon before they were allowed to eat it, and in response, Basho improvised the following haiku:

first makuwa melon – / do we quarter it / or cut it in rounds?

Alternative readings for the characters in the second phrase are “yotsu ni kiran” or “yotsu ni tatan.”

The poem, which appears near the center of the paper, possesses the straightforward and humorous character of an improvised poem, along with a sense of anticipation for the melon that the guests would soon be enjoying. Alongside Basho’s poem appear three other haiku composed by Sora and Fugyoku (the haiku name of the Sakata physician Ito Genjun), who were also present, as well as Gyokushi himself, conveying the relaxed and convivial atmosphere of the gathering.